As a partner at Draper Fisher Jurvetson, Josh Stein has invested in some of the most well-known SaaS companies in the world like Box and Yammer and spent plenty of time with truly remarkable SaaS CEOs. In this session he and Jason Lemkin sit down and dive into what really makes a great CEO, and how that […]

By Tony Knopp, CEO & Co-Founder of InviteManager, which makes planning your client entertainment easy. Building an enterprise SaaS is a challenging proposition. Doing so with a services business attached can be even more interesting. Here are seven things we’ve learned about building, raising money for, and growing an enterprise SaaS with a hybrid services […]

In my first start-up, I was mostly hunting whales — seven figure and eight figure deals. I had no experience doing any of this. For our First Big Customer, we’d been negotiating a $6m/year contract for quite some time (they always take time). We finally had the “all hands” meeting with all the C-level and […]

4 Tips To Earn Respect as a Young CEO

While age ultimately doesn’t matter — results do — in SaaS, starting off as younger-than-average can create stress in a sales and customer-driven environment. But Aaron Levie started Box at 19, Mark Zuckerberg and Bill Gates dropped out at 19-ish, you know all this. Some some hacks: Start with SMBs. It’s easier to get taken seriously, […]

At $50k in MRR, Running Out of Money Is No Longer an Excuse

We’ve talked a lot about SaaStr on the challenges in getting from nothing to that first $1m-$1.5m in ARR, “Initial Traction”.  That is takes longer than you think.  That if you get 10 customers, you can get another 10, 100, and so on. There’s a particular moment in time I want to focus on here […]

I don’t know if you’ve noticed, but recently, the public markets have been in a bit of turmoil.  Or at least, under a bit of pressure. Below is the other day, on the left.  And ’08 on the right. In the grand scheme of things, all we’ve seen recently is some volatility: Still, for now […]

“So my answer was: Nothing. No change.”

I guess in some ways SaaStr is a digest of mistakes we all make in recurring revenue businesses, how to avoid them, or at least, make fewer. There’s one important mistake folks tend to make consistently in the early days.  It’s the mistake of thinking anyone, any company, actually needs their product. And because they […]

It seems like everyone wants to be a SaaS founder these days.  I meet with great VPs of Sales and Product in particular who are Ready.  It’s time.  To go out on their own.  Start their own SaaS company. Awesome. I get it.  I’d like to recruit you to be a VP at one of […] 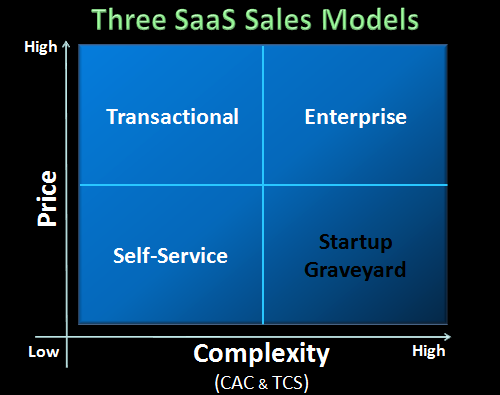 Choosing the right go-to-market sales model for your SaaS startup can be a make it or break it decision. Choose right and you grow smoothly from seed funding to A round to B round and beyond. Choose wrong and you spend precious cycles chasing your tail as cash runs out. While most B2B SaaS startups […]