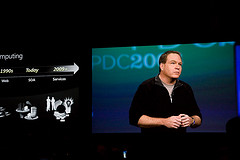 Image by ahockley via Flickr While talking about Private Clouds on Twitter, Sam Johnston (who is currently with Google and involved in OCCI , Cloud Audit, etc.) used to refer to them as #notacloud. His argument is that the so called Private Clouds are nothing but virtualization with management interface slapped around it. Even though […]