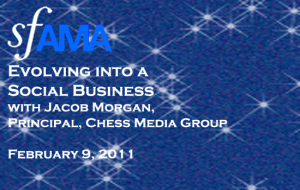 I’m speaking at the American Marketing Association during Social Media Week on “Evolving into a Social Business.”  The event is on Feb 9th from 6-8pm at 1550 Bryant Street Penthouse–Eleventh Floor.  Here’s the description of the event: Organizations are getting more involved with social media as tools and channels but inevitably the question of “now what?” […]

I recently had the pleasure of attending the Social Media Club (San Francisco and Silicon Valley chapter) panel session around Social CRM which was moderated by Jeremiah Owyang and included Salesforce, Get Satisfaction, Mint, and Lithium Technologies.  The room was packed with around 100+ people that were all interested in Social CRM, which was great.  […] 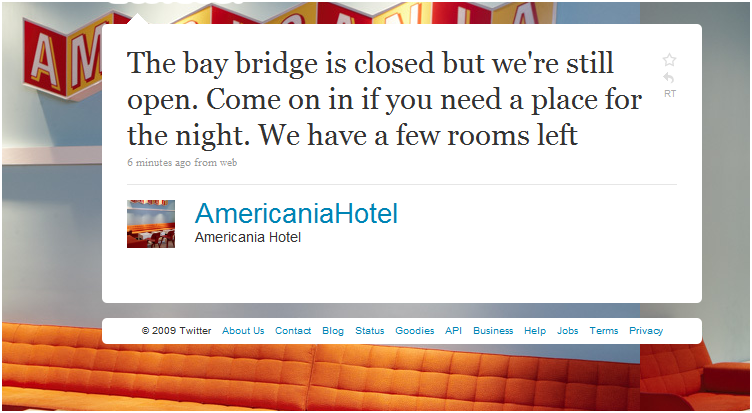 Hotel Capitalizes on Bay Bridge Closure – on Twitter, Where Else?

The above tweet is from a San Francisco hotel, capitalizing on the “opportunity” created by the Bay Bridge closure.Whoever said Twitter was not for business?  🙂 Related (and happier) post:  Another Enterprise Web 2.0 “WOW” Experience

The Power of Less: Web 2.0 Expo and Beyond

This is my second post running up to Web 2.0 Expo.  See some of my comments on networking and Ben’s call to stay fit  – he needs to come up with a Web 2.0-ish way of coordinating the morning runs. The theme of this years Expo is The Power of Less.  Less in funding, budgets, […]

Spring is at the doorsteps and with that Conference Season is upon us. Recession or not, Some Conferences Are Worth Attending Even in Bad Times.  We @ CloudAve are the Media / Blog partners for three conferences coming this spring – each notable in its own, unique way. Web 2.0 Expo Under the Radar Glue […]

I’m stoked to have received confirmation that both Zoli and I will be attending the Web 2.0 Expo in San Francisco at the start of April. I’m also one of the blog partners (and in a double feat, so is Zoli) and we will be taking part in a bloggers roundtable with some guy called […]