So Microsoft has confirmed the rumored acquisition of Yammer for $1.2B. Here’s my thoughts; Potentially this is a great opportunity for MSFT to create a fabric that spans their different enterprise products (Dynamics, Office, SharePoint) that’s a big big opportunity but I believe technology and platform hurdles will push that possibility well into the future […]

By Krishnan Subramanian on March 5, 2010

Yesterday Microsoft CEO Steve Ballmer gave a talk on Cloud Computing at the University of Washington, Seattle. Check out the video of the entire talk here. Let me briefly highlight the key points from his talk and then offer my perspectives on it. He was highlighting five key dimensions of the cloud Cloud creates opportunities […]

This is one of the most refreshing ideas in business today, have managers actually held accountable for how well their divisions are doing, and how much money they are making. In the only instance I have seen of this phenomenon in a long time, Microsoft top leaders all took a pay cut because of the […] 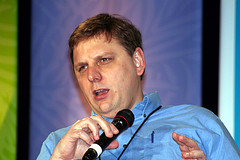