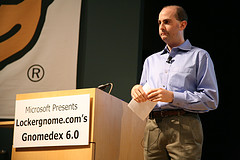 It Is Not A Bloodbath In The Clouds

Image by Laughing Squid via Flickr Steve Rubel, in his blog, has a new post with somewhat provocative title. He talks about recent shutting down of some of the Cloud based applications and calls it “Bloodbath in the Clouds”. A part of his post is a bit of exaggeration but he has some valid points. […]