Ze Frank is an American online performance artist, composer, humourist and public speaker. He wanted to share notes, practical advice and war stories on the value of contribution through to the challenges of feeling a virtual audience. Words don’t do justice… Frank’s presentation was an act of creative genius. Indescribable but and act of genius […]

Michael Lopp is a veteran of Apple, Netscape, Borland and Symantec. He explores the class of people who span both Generation X and Y and that he calls “The Geeks” – a group that has spent the last two decades moving amongst the dark technological fringe and is now a mainstream demographic. Michael contends that […]

Heather Champ is the director of community at Flickr, seeing it grow to 24 million members sharing 2.8 billions photos and videos with 3 billion page views per month. Heather started off warning the audience that she would swear during her presentation, consider yourselves warned by extension! Heather loves that Flickr allows users to see […]

Adrian is a journalist (ahhh – that’s a good thing – a dying breed) and a developer of web apps for washingtonpost.com, lawrence.com and LJWorld.com. If that wasn’t enough he also co-created Django the open-source development framework. Adrian described how the long tail relates to news and current events. That there is significant specific content […]

David is a tech lead for Six Apart, home of the blogging software that powers most of the worlds pro blogs, Movable Type. How do we make it easy for people to join sites, bring friends and profiles and take advantage of the substance of your offering? Why is it so hard currently – profiles, […]

Meg Pickard is the head of communities and user experience for guardian.co.uk. She points out that users interact with content in many different ways. Consume, React, Curate, Create… If people can create recommendation lists on the likes of Amazon, why can they not on traditional news sites (writers comment – isn’t this what digg is […]

Author of “Design for Community, The Art of Connecting Real People in Virtual Places”, Powazek is an alumnus of HotWired, Blogger and Technorati and he wondered why despite the wisdom of the crowds (Google “James Surowiecki”), community generated content tends to be somewhat *low brow* results… The four elements of crowd wisdom are; Diversity Independence […]

Home-town hero Nat Torkington, ex (and sometimes current) alumni of O’Reilly media is always a good choice for an entertaining show, he didn’t disappoint this time! What is the ultimate feedback loop? Science needs failures to progress, Torkington gave historical examples to prove his contention. Within technology we also use a failure fuelled feedback loop […]

McGonigal is a game researcher at the institute for the future. Her ethos is that in game-design the human experience is perfectly optimized – we feel we have purpose, we feel we are collaborating and we feel we have a meaning. Why then are other aspects of our online (and for that mater offline) experience […] 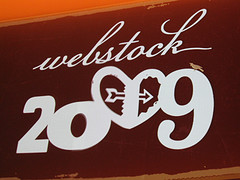 Well here we are in the vibrant, creative and seemingly totally web-enabled city of Wellington (disclosure – I’m a Wellington boy borne and bred). Around 600 people have jetted in from all around the world to take part in what is quickly getting a name as one of the coolest conferences bar-none (heck – even the free […]

Webstock – Here We (or at least I) Come

Webstock is a Wellington, New Zealand conference that describes itself as; 5 full-on days. 8 hands-on workshops. 23 kick ass speakers. 26 must see presentations. Truckloads of design, development, user experience, web standards, content, community, innovation and inspiration It has attracted a pretty rabid following (at least in our neck of the woods) for it’s […]