GoodData – More of the Same, Dressed Up Like New?

Late last year GoodData gained quite some degree of publicity – due in no small part to the caliber of its investors. Tim O’Reilly is both an investor and board member and Marc Andreesen is also behind the venture. At first blush it would seem that GoodData provides the holy grail – on-demand visualization and […] 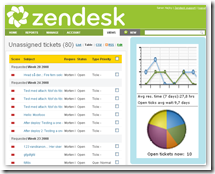 I’ve written many times in the past about Zendesk (see here) and have also written about YouCalc. These two companies have much in common, YouCalc founder Rasmus Madsen was actually part of an early “friends and family” funding round for Zendesk, they’re both from Denmark (although Zendesk is now based in San Francisco) and they […]

Spending a week in Boston at the Enterprise 2.0 conference recently was great. Despite the plethora of channels open to us today (at the moment I have email, Twitter, IM and voice open in front of me) there is no replacement for face to face contact. This is never more so than for someone like […]

Analysis – The Choice of a New Generation

Image via CrunchBase As part of this weeks Enterprise 2.0 conference in Boston a launchpad series was run where four finalists were invited to pitch to the audience who would then vote for a winner. I posted about the four finalists before the event and made my prediction for the eventual winner. I’m pleased to […]